Geneva, Switzerland, 11 January 2023 – For the past 17 years the World Economic Forum’s Global Risks Report has warned about deeply interconnected global risks. Conflict and geo-economic tensions have triggered a series of deeply interconnected global risks, according to the World Economic Forum’s Global Risks Report 2023. These include energy and food supply crunches, which are likely to persist for the next two years, and strong increases in the cost of living and debt servicing. At the same time, these crises risk undermining efforts to tackle longer-term risks, notably those related to climate change, biodiversity and investment in human capital.

These are the findings of the Global Risks Report 2023, released today, which argues that the window for action on the most serious long-term threats is closing rapidly and concerted, collective action is needed before risks reach a tipping point.

The report, produced in partnership with Marsh McLennan and Zurich Insurance Group, draws on the views of over 1,200 global risk experts, policy-makers and industry leaders. Across three timeframes, it paints a picture of the global risks landscape that is both new and eerily familiar, as the world faces many pre-existing risks that previously appeared to be receding.

At present, the global pandemic and war in Europe have brought energy, inflation, food and security crises back to the fore. These create follow-on risks that will dominate the next two years: the risk of recession; growing debt distress; a continued cost of living crisis; polarized societies enabled by disinformation and misinformation; a hiatus on rapid climate action; and zero-sum geo-economic warfare.

Unless the world starts to cooperate more effectively on climate mitigation and climate adaptation, over the next 10 years this will lead to continued global warming and ecological breakdown. Failure to mitigate and adapt to climate change, natural disasters, biodiversity loss and environmental degradation represent five of the top 10 risks – with biodiversity loss seen as one of the most rapidly deteriorating global risks over the next decade. In parallel, crises-driven leadership and geopolitical rivalries risk creating societal distress at an unprecedented level, as investments in health, education and economic development disappear, further eroding social cohesion. Finally, rising rivalries risk not only growing geo-economic weaponization but also remilitarization, especially through new technologies and rogue actors.
The coming years will present tough trade-offs for governments facing competing concerns for society, the environment and security. Already, short-term geo-economic risks are putting net-zero commitments to the test and have exposed a gap between what is scientifically necessary and politically palatable. Dramatically accelerated collective action on the climate crisis is needed to limit the consequences of a warming world. Meanwhile, security considerations and increasing military expenditure may leave less fiscal headroom to cushion the impacts of an elongated cost of living crisis. Without a change in trajectory, vulnerable countries could reach a perpetual state of crisis where they are unable to invest in future growth, human development and green technologies.

The report calls on leaders to act collectively and decisively, balancing short- and long-term views. In addition to urgent and coordinated climate action, the report recommends joint efforts between countries as well as public-private cooperation to strengthen financial stability, technology governance, economic development and investment in research, science, education and health.

“The short-term risk landscape is dominated by energy, food, debt and disasters. Those that are already the most vulnerable are suffering – and in the face of multiple crises, those who qualify as vulnerable are rapidly expanding, in rich and poor countries alike. In this already toxic mix of known and rising global risks, a new shock event, from a new military conflict to a new virus, could become unmanageable. Climate and human development therefore must be at the core of concerns of global leaders to boost resilience against future shocks,” said Saadia Zahidi, Managing Director, World Economic Forum.

John Scott, Head of Sustainability Risk, Zurich Insurance Group, said: “The interplay between climate change impacts, biodiversity loss, food security and natural resource consumption is a dangerous cocktail. Without significant policy change or investments, this mix will accelerate ecosystem collapse, threaten food supplies, amplify the impacts of natural disasters and limit further climate mitigation progress. If we speed up action, there is still an opportunity by the end of the decade to achieve a 1.5ᵒC degree trajectory and address the nature emergency. Recent progress in the deployment of renewable energy technologies and electric vehicles gives us good reasons to be optimistic.”

Carolina Klint, Risk Management Leader, Continental Europe, Marsh, said: “2023 is set to be marked by increased risks related to food, energy, raw materials and cyber security, causing further disruption to global supply chains and impacting investment decisions. At a time when countries and organizations should be stepping up resilience efforts, economic headwinds will constrain their ability to do so. Faced with the most difficult geo-economic conditions in a generation, companies should focus not just on navigating near-term concerns but also on developing strategies that will position them well for longer-term risks and structural change.”

The Global Risks Report is a pillar of the Forum’s Global Risks Initiative which works to promote greater common understanding of short-, mid- and long-term global risks to enable learning on risk preparedness and resilience. This year’s report also examines how present and future risks can interact with each other to form a “polycrisis” – a cluster of related global risks with compounding impacts and unpredictable consequences. The report explores “Resource Rivalry”, a potential cluster of interrelated environmental, geopolitical and socioeconomic risks relating to the supply of and demand for natural resources including food, water and energy. 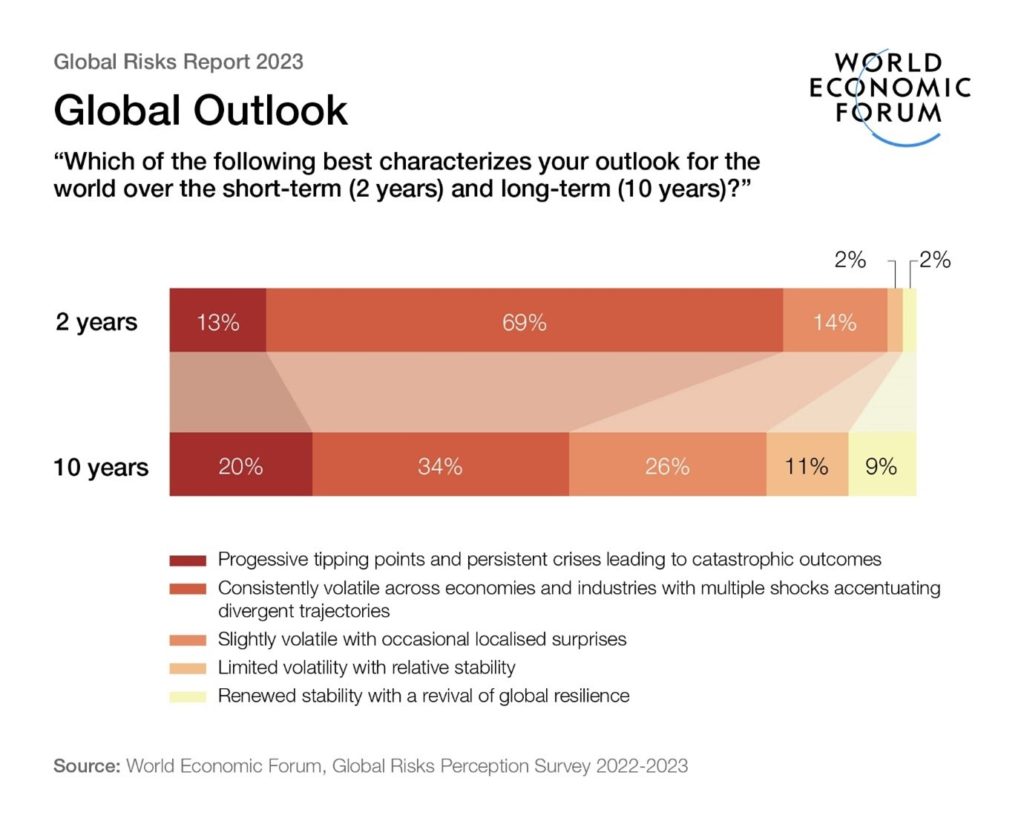 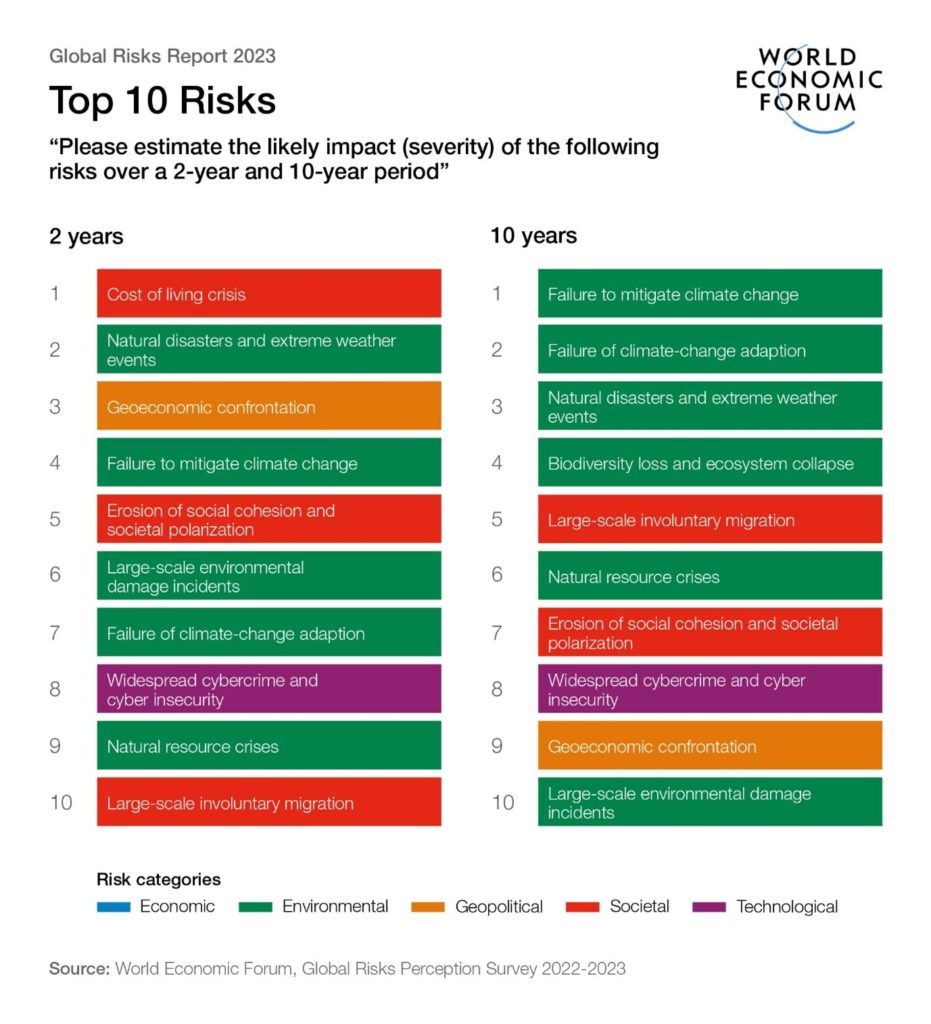